Farming and Family – A Talk With the Chandlers of Mariaville Farms 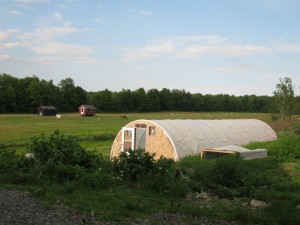 One of the farm’s many beautiful views.

The business of  Mariaville Farm is a family affair, based in a genuine love of the animals, and of the land. While Chris Chandler didn’t grow up on a farm, she and her husband Bob decided years ago that they wanted to raise their children in the country. They moved to rural Delanson when their oldest son was three and since then, their family has put down deep roots. It’s easy to see why the Chandlers fell in love with the area, the rolling hills are picturesque, the pastures are beautiful and green, and the roaming animals make their farm look like a postcard. What makes it even more amazing is that this oasis is only a few minutes away from Rotterdam Square mall.

The Chandlers purchased their first Black Angus cows from their realtor, an Angus farmer, and joined 4H soon after. Then the boys — Bobby, Johnny and Billy — started working with show quality animals and showing at fairs. In addition to the show animals, the Chandlers raised some of their animals to eat. After a while, Chris said, “we were pouring so much money into [the farm] that we [decided we] should probably start making money doing it.” That’s when the Chandlers started selling their meat at the Union Street Farmer’s Market. Shortly after that, Schenectady Greenmarket approached Mariaville Farm and asked them to join their group of vendors. Their business has nearly doubled every year since, which has allowed the Chandlers to make the farm a full-time job (Chris also works as a school bus driver and Bob is a general contractor). 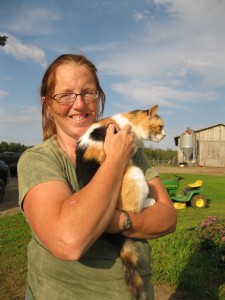 Chris Chandler and her cat, which followed us around throughout the interview.

Chris is the primary caregiver for the animals, although she is quick to note that everyone has their own list of chores. She says that she spends about two hours in the morning and two hours in the afternoon “checking on everybody, giving them food that they need, giving them the water that they need… just doing a little bit extra each day to make sure that everything’s going the way that it should be.” She even takes care of some of the animals medical needs, giving them shots when necessary and once even setting a newborn calf’s broken leg. When I asked her what her favorite part of the job is, Chris immediately told me that it’s when the animals have babies. She loves it “even when we’re out in the middle of the night in January and it’s zero degrees and we’re calving [or] lambing.” She also told me that her sons joke that it takes her four hours to do the chores that they can do in two because she spends extra time talking to the animals and making sure that they’re clean. Despite the teasing, she swears by it, saying that the extra effort is “probably why the animals are so healthy.”

In addition to the Black Angus beef that they’re known for, Mariaville Farms sells lamb, turkey, chicken, duck, and ham and less-conventional meats like rabbit and goat. In addition, Mariaville sells eggs, hay, and as of this year, oyster and Shiitake mushrooms. Bobby, their oldest son, is the mastermind behind the mushroom operation, and he’s recruited his brothers and friends to help him out – leading to them being nicknamed the Mariaville Mushroom Men. 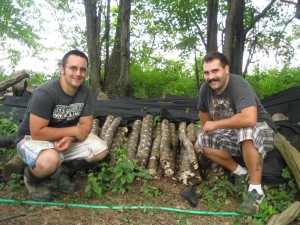 Johnny and Bobby Chandler with some of their Shiitake logs.

To grow Shiitake mushrooms, they inject mushroom spawn — a combination of mushroom mycelium and sawdust — into four-foot oak logs into which they’ve drilled holes. Then they wax over the holes and let them sit under a shade cloth for six to 18 months until they are ready to fruit. Then they soak the logs in water for 24 hours and begin producing mushrooms. This process can be repeated many times until the log produces two to four pounds of mushrooms, which usually takes three to seven years. For oyster mushrooms, the process involves putting spawn in between sections of poplar logs and leaving them to grow inside of plastic bags.

Bobby was inspired to start growing mushrooms after going to school for pharmacy and getting a degree in biology. He feels that there are a lot of untapped natural remedies in the world, and that “mushrooms [are] one of the best super-foods you could ever consume. They’re loaded with vitamins… [and] they have a lot of enzyme inhibitors” which lower the risk of developing certain cancers. For Bobby, growing mushrooms combines his twin desires to help people and help the farm and he wants other people to get involved. In addition to selling logs for other people to grow at places like Schenectady Greenmarket, the brothers are about to start a project at Schalmont Middle School, which will involve an inter-disciplinary study of mushroom growth in their science, math, and home ec classes. 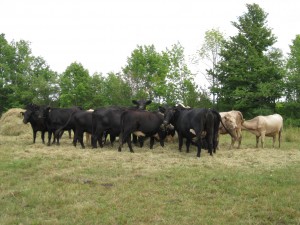 This commitment to the health of the community is also evident in Mariaville Farm’s business practices. Although Mariaville isn’t certified organic (they don’t buy organic feed) all of their animals are free-ranged and pasture raised. They don’t use any pesticides on the grass and Chris said that no one has sprayed any pesticides on the land in at least 50 years. In addition to the untreated grass, the Chandlers supplement some of their animals’ diets with feed when necessary, but they can be picky about the sort of feed they use. According to Chris, a friend dropped off a bag of chick feed with antibiotics in it recently and Chris didn’t know what to do with it. The Chandlers never feed their animals antibiotics and only give the animals medicine when they are actually sick, a practice which not only benefits the animals, but the people who will eventually eat the meat they provide.

Ultimately, my visit to Mariaville Farm was a great reminder of the positive impact that a small business run by compassionate people can have on a community. The Capital Region and Schenectady Greenmarket are lucky to have Mariaville Farm and based on their current successes, I imagine that we’ll continue to be so lucky for years to come. 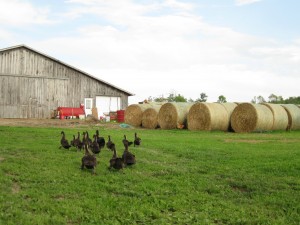 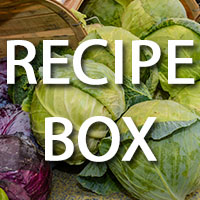